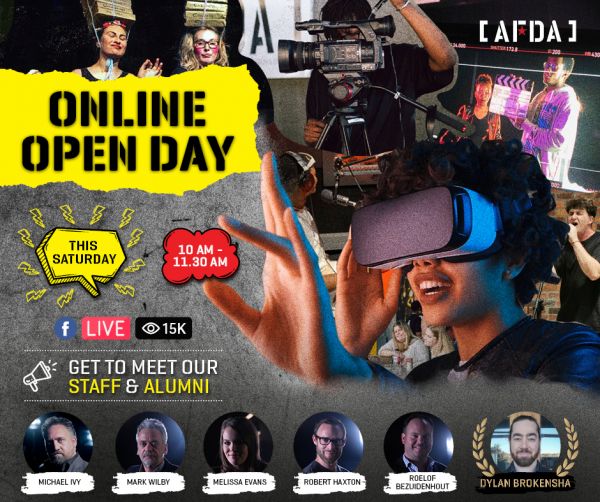 Our Social Media Officer, Noluthando Mnguni, will be hosting the AFDA Online Open Day on Saturday 1st August from 10am on Facebook Live and can’t wait to introduce you to our highly experienced and multi-award winning AFDA Port Elizabeth staff and alumni. Here is who you can look forward to seeing live on campus this Saturday and they are sure to tell you about all AFDA has on offer:

“I believe that storytelling is the quintessence of tolerance, understanding and the potential of the human imagination. Stories allow us to be enthralled by cultures and people of all creeds and backgrounds. In the future I strive towards earning my Masters degree so that I’m even more equipped to produce cinema that is both viscerally and emotionally engaging. I am obsessed with film, literature, and video games (especially those of the sci-fi and fantasy kind) and hope to channel these passions into the work I make.” says Dylan.

Michael is an Academic, Designer, Artist, Singer, Painter and Stylist.  His research on the fictionalization of the ego have been presented at the International Fashion Interdisciplinary Conference at Oriel College & Mansfield College in Oxford.  He is a famous Proudly South African Fashion Designer who’s styling, makeup, fashion design and hair work have been showcased and published in numerous international and national magazines, such as Cosmopolitan, ELLE, Marie Claire, South African Sports Illustrated and Drum. He have designed for brands such as Levi Straus, Absolut Vodka, Spiced Gold, Nashua and many more.

He recently released his own personal MICHAEL IVY PROFESSIONAL MAKE-UP brand which are in use at the AFDA Port Elizabeth campus and he is in the process of developing pressure sensitive and colour-changing eye shadows as well as the first ever Primary, Secondary and Tertiary Colour Foundations that are focused on education, positive psychology and healing.

Melissa holds a Bachelor of Arts degree in Media Studies and Contemporary Culture, and a Master of Arts degree in Contemporary / Film Studies (both from NMMU). She focused specifically on film theory and research in her final year of study, in particular feminist representations in the film. Previously, Melissa worked as a producer for the Eastern Cape’s local television station Bay TV, creating and overseeing a daily children’s program, whilst also receiving television production training from The Media Workshop. In addition to lecturing at AFDA.

Robert completed his BA in Drama and English in 2007, Honours in 2008 and obtained his Masters in Directing at Rhodes University Drama Department. He has worked, performed for and directed a vast number of works for the National Arts Festival (NAF).

From 2011 through 2013, he worked as a Marketing, Financial and Administrative Manager for both Ubom! Eastern Cape Drama Company and Rhodes University Drama Department as well as headlining and teaching a facilitation course. From 2014 – 2015 Robert performed in the Artscape produced “Chomi” written by Pfarelo Nemakonde and directed by Motlatji Ditod.

Mark has worked in various capacities in the South African film industry since the nineteen-eighties. As a production designer, he has worked on domestic (SABC, MWEB) and foreign (BBC, Channel4, Canal+) television productions, and designed numerous local and international features such as “Krakatoa”, “Red Dust”, and “Mandela’s Gun”. He has twice received the MNET-VITA Award for production design. As a director, two early drama films Astor Mansions and Half-an-Hour were award-winners on the Weekly Mail Film Festival. Relocation to the Karoo in the mid-nineties prompted the pursuit of documentary film as a medium for social and environmental change. Mark is attracted to the vision of the AFDA campus in Port Elizabeth – that of establishing itself as the cornerstone of a burgeoning industry in the Eastern Cape.

With a BA Honours Degree at North-West University, Roelof started his career in the television industry, working at Media World as cameraman-director on shows like “AgriTV” (SABC 3) and “Ulimo” (SABC 3). After 7 years producing contend for Pincess Cruises (one of the world’s largest luxury cruise companies in the world) as on-board videographer he gave his sea legs a break and worked as an Video Editor at Night Owl Media. Roelof then landed a job as a Television Director and off-line editor for the popular Afrikaans show “Kwela” (on kykNET). When ownership of the company eventually changed hands and moved to Cape Town, Roelof joined Bostom Media House as Video and Television Lecturer, teaching all three years of this subject as part of a Diploma in Media Practices. He was then promoted to Academic Manager: Television, Radio and Sound Enginering, where his job was to oversee these subjects at Boston's 3 Media House campuses. Roelof is also a freelance journalist and travel writer for newspapers such as Die Burger and Beeld. 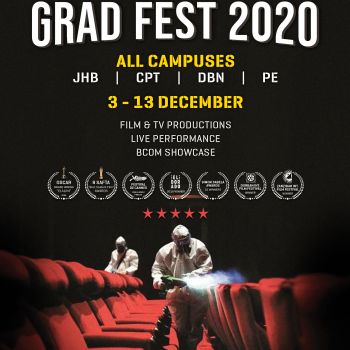 Over the last 26 years AFDA students in their final year of their Undergraduate and Postgr... 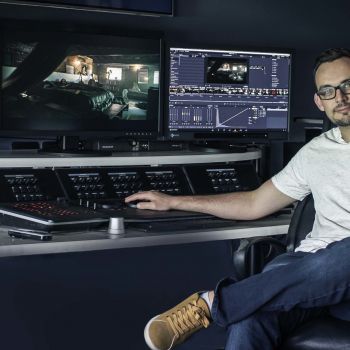 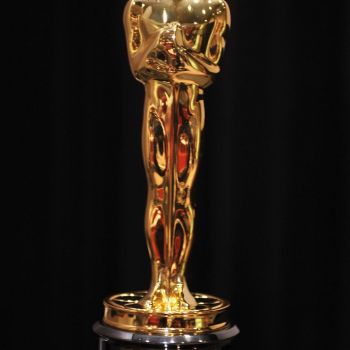 Two AFDA alumni films in race for the Oscars 2021

AFDA is as proud as punch to announce that two AFDA alumni feature films have been selected as candi... 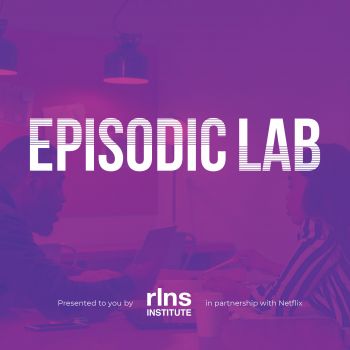